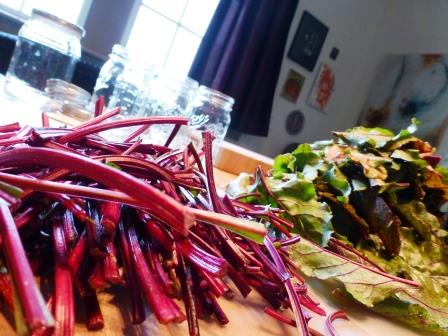 This is not just a food blog. I promise we’ve got lots of updates to share soon on various home improvement projects, krakhaus renovations and developments with the once-and-future orchard. But Jenn told y’all I’d share my embarassing story about delicious way to use beets, so let’s do that first.

One Saturday last year, Jenn had an event that, for some reason, kept her out all day. In no way did I abuse this rare privilege with a marathon session of “Red Dead Redemption.” More to the point: I was to fend for myself on the food front.

Now, despite Jenn’s vegetarian leanings, I’m still a meatosaur some 30 percent of the time. So I usually take advantage of these situations to chaw on some bloody red meat. I don’t remember now what was different about this day — maybe I was broke — but I decided to use only the fridge as my dinner palette. Jenn had roasted some beets from the groceries that came from the CSA the week before, and they were in the fridge. And then there were this week’s fresh supply of beets in there. Maybe there was a kohlrabi in the mix, too. Looked like I was gonna eat me some beets.

I started to prep the new beets for storage, and before I threw out the green tops, on a lark I searched the Web to see if a fellow could do anything with them.

Turns out they frickin’ rock when cooked. Including the stems. (I know!)

So here’s the trick.:

Then it gets tricky.

Put the greens on a plate. Slice a few of the roasted beets on top of the greens. And eat.

About halfway through my plate, I was like, “This is SO good! I can’t believe we’ve been TOSSING OUT THE GREENS! I’m going to eat beet greens ALL THE TIME!” Yeah, I might have had a little bit to drink. Don’t judge me.

And I thought everything was cool, but there was trouble a’brewing.

I don’t know how to discreetly tell this next part. So I’ll flash forward to this year, when Chris Jackson, one-half of our CSA farmer couple, hands me a bunch of beets. I got an excited look on my face, followed by what must have been an “oh crap” look on my face. He seemed to want an explanation, so I told him the story that I’ve just shared. Then I said:

“But there was some, uh, trouble.”

He read between the lines: “Some discoloration?”

It’s true. I noticed it several hours after my delicious meal, right before I flushed the toilet. “What the…?”

The inside of that bowl was a truly alarming color. I thought I was bleeding before it dawned on me the effect beets can have on the internals. An Internet search confirmed the harmless, vibrant and disconcerting fact. Beets can stain your poo!

Written By
Brad
More from Brad
I’ll try to make this mercifully short, for those who’ve been around...
Read More